In Loving Memory of Sandra Jaffe

Click Here to Donate in Honor of Mrs. Jaffe

Our mom, Sandra Jaffe, grew up in Philadelphia in public housing. She and her two sisters were raised by Jewish immigrant parents. Jack, her father, was a teenager when he and his siblings escaped Russia and the Cossacks.

Sandy, as she was known to all, was a child of the 1930s-40s. Her lifelong childhood friends describe her as “adventurous,” “curious,” “a butterfly,” “a bright light,” and “an amazing human.” Once, she snuck away on an adventure (I believe boys were involved) with her friend Karen to Atlantic City, broke her toe, went to the hospital and had to ride home with her foot out the car window. 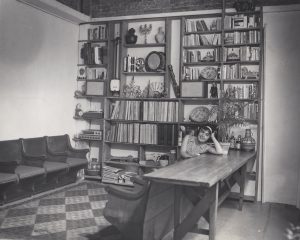 She was the oldest of three sisters. My Aunt Resa and Aunt Brenda are kind, sweet, loving, caring and compassionate people. I’ve heard our mom described the same by my cousins. Nevertheless, our mom, like her father, could also be aggressive and stern and unpredictable in good and bad ways. One didn’t know when this side of Sandy would come out. Her behavior was often forgiven or rather accepted as eccentric. Wouldn’t one have to be to choose the life she chose?

To most people, she was the brave, courageous, young woman who alongside her husband, our father Allan, in their 20s, set out on a Kerouac On The Road adventure that led them to Mexico City, where they spent several months. On the way back to Philadelphia, they stopped in New Orleans and, like others before and after, found themselves swept away in the beauty, romance, excitement, mystery, freedom, history, unsettled business and charm of the city.

They took an apartment in the French Quarter on Royal Street across from the Cornstalk Fence, overlooking a courtyard. Within days, they found themselves inside a gallery, owned by Larry Borenstein, on St. Peter Street where informal concerts were being held by a community of artists, writers, historians, thinkers, drunkards, eccentrics, photographers, actors, expatriates, poets, insiders and outsiders. Larry immediately recognized something in my parents and, without much thought or hesitation, offered them the space to continue the concerts more formally as a business. In that moment, in 1961, Preservation Hall was born. 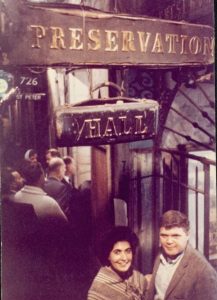 It became a haven that celebrated, and gave work to, the pioneering Black and Creole musicians of the city, many of whom could no longer find gigs. It also preserved and revitalized the traditional jazz that had once flourished in New Orleans.

Preservation Hall was the first fully integrated music venue in the South. Sandy was once arrested for violating the segregation laws of the early 1960s, but she and our dad prevailed and helped usher in the era of integration.

I write this history because this is how Sandy should be honored: By her achievements. Her bravery in the face of racism. Her ability to honor and celebrate one of the world’s greatest gifts, New Orleans music.

She could be kind and stubborn, unwilling and gracious, unflinching and endearing. One would have to be all of these things to face and endure the Jim Crow segregation laws in New Orleans in 1961.

By the time the Civil Rights Act of 1964 was passed, followed by the public accommodations laws integrating the city, many of the musicians Preservation Hall was created to honor — Sweet Emma Barret, Punch Miller, George Lewis, Percy Humphrey, Willie Humphrey, Billie & Dede Pierce — had become family, and the courtyard buildings behind Preservation Hall had become our parent’s physical home.

They decided to remain in New Orleans and raise a family. I thank goodness they did. Everyone had a different relationship with Sandy. What we all know is she was a fervent lover of the arts, an avid reader of the news, worldly. Her curiosity never ran out. Sandy adored her family. She was a sister, daughter, aunt, mother, cousin and a loving grandmother to her 4 beautiful grandchildren: Allaina, Rebecca, William and Emma Lena. For everything she was, the good, the tough, the strong, the sad, the pain, I loved her dearly and will continue to honor her and our father’s life.